Skip to content
Inicio / Italy and Spain: a tale of two countries

Italy has been the focus of Europe’s woes over the past few weeks. The outcome of its constitutional referendum on 4 December caused much nervousness in the markets and renewed concerns about the future of the EU. A number of analysts predicted a continental cataclysm if Prime Minister Matteo Renzi were to fail in his attempt to implement a set of reforms that ultimately would reduce the powers of the Senate and grant the Government much more power and freedom of manoeuvre to tackle Italy’s main structural challenges: the troubles with the Italian banking sector, the rise of Beppe Grillo’s Five Star Movement and the real risk of permanent political and economic stagnation.

Finally, Renzi lost his personal bid for the planned reforms and resigned. In his place, Italy’s President Sergio Matarella proposed Paolo Gentiloni, who has won the support of both chambers of Parliament. It has turned out that the Ministers in the ‘new’ government appointed by Gentiloni are almost the same as Renzi’s cabinet. All are committed to a very similar ‘new’ agenda, full of the usual ‘new’ great expectations. Meanwhile, markets have barely bounced. A key issue should be borne in mind: Renzi is the fifth consecutive Italian Prime Minister to resign, after Prodi, Berlusconi, Monti and Letta. Everything seems to change in order to remain the same: Italian business as usual.

At 1,373 km from Italy, Spain seems to be following a different course. Despite the Spanish Popular Party not having an absolute majority in Parliament, the former Prime Minister Mariano Rajoy managed to be invested for a second term and formed a new Government, relying on concrete agreements with other parties to achieve much-needed stability for the country. Good macro indicators support Rajoy’s position: GDP is forecast to achieve a remarkable 3.2% growth in 2016, the unemployment rate is still high but declining steadily, consumption has improved and exports are consistently beating expectations. The two different country trends are reflected in the bond market yield curves shown in Figure 1. 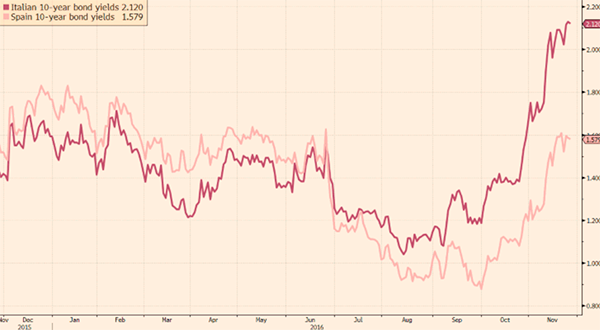 Source: European Commission and the authors.

Taking into account these apparent divergences, it is worth analysing the socio-economic trends in Italy and Spain. Ultimately the aim is to find out whether Spain’s better performance is structural or merely temporary. A closer look at the evolution of key indicators in both countries may help better understand transalpine realities.1

The main factor that distinguishes Italian from Spanish demographics is migration. The immigration boom and bust that occurred in Spain, especially since the beginning of the 21st Century, did not take place in Italy. The impact on population growth was substantial, as shown in Figure 2.

Although the population aged over 65 increased at the same rate in both countries, the Spanish immigration boom helped rejuvenate the demographic base. As shown in Figure 3, that did not happen in Italy.

These trends finally resulted in clearly different aging rates (see Figure 4). In other words, Italy has a worse demographic structure than Spain, a fact that could weigh heavily on the country’s future.

Demographic features have a strong impact on employment. Figure 5 shows how the activity rate in Spain has grown considerably, finishing seven points above Italy’s. And although Italy has significantly less unemployment than Spain (11.5% versus 19.7%), its employment rate is forecast to become lower, meaning that more Italians than Spaniards will stop looking for work.

The active population grew in Spain due to the immigration inflows mentioned above, as well as to the higher female labour-force participation rate. From 1990 to 2014 female participation has risen from 34% to 53% in Spain and from 35% to only 40% in Italy (see World Bank data). Hence, although there is a much lower unemployment rate in Italy, the latter’s inactivity rate is much higher than Spain’s. To complete the picture, it is also worth noting that the average hours worked per employee in both countries have converged in the lower range. Therefore, putting all these factors together, it can be concluded that Spanish labour market now appears to be in a better shape than its Italian counterpart.

While Italy is the world’s ninth largest economy in GDP PPP terms (with Spain in 14th place), its poor growth is undoubtedly its sword of Damocles. It has consistently underperformed compared with the rest of the euro area during the past three decades, a trend which started long before the introduction of the euro and has deteriorated in the aftermath of the financial crisis.

The graphs in Figure 7 show the comparison between Spanish and Italian GDP growth. While in annual terms the difference could seem somewhat limited, the contrast between cumulative growths is significant: 50% since 1997 in Spain versus 10% in Italy. Moreover, according to EU forecasts, in 2018 Spain will surpass Italy in per capita GDP (in PPP terms) for the first time ever.

No doubt Italy, the world’s 10th largest exporter in 2015 (while Spain was only 18th), stands out as a manufacturer and seller of high-quality goods, especially in the luxury market; the Italy brand has been a key factor in the relative resilience showed by transalpine exports during the crisis. However, demand in Italy’s export destinations has grown less than world trade, causing the country to lose market share in world exports. At the same time, Spain’s share in global trade has remained relatively stable, although at a lower level.

When it comes to bilateral trade, Spain is maintaining its share in Italian imports (at around 5%), whereas Italy has been progressively losing quota in the Spanish market.

Another significant source of concern in Italy is its public debt, now close to 140% of GDP, a disturbing level mainly caused by the country’s poor GDP growth. In overall volume, it is the second-largest public debt among Eurozone countries and the fourth-largest worldwide. By contrast, the Spanish public debt ratio, which is approaching 100% of GDP, grew faster during the crisis but still remains far from the Italian level.

As for public deficit, the charts in Figure 11 reflect how Italy’s deficit has not been subject to significant variations despite the changes in the economic cycle. The country exited the EU’s Excessive Deficit Procedure in 2012, keeping the figure below 3% since then. In contrast, the evolution of Spain’s fiscal balance has been much more dramatic and difficult to control. Similarly, Italy has been consistently running moderate primary surpluses, but insufficient to reduce its large debt, while Spain is improving but still struggling to reach its pre-crisis level, mainly achieved through a huge real-estate bubble.

According to the EU, Italy only implemented solid fiscal adjustments in 2012 and 2013, and it is now urging the Italian government to undertake important economic and structural reforms.

The comparison in this area shows a striking difference between the two countries. Spain is more indebted to the world than Italy. Since the introduction of the euro, both countries’ net foreign assets declined, but much more dramatically in the Spanish case. Spain has finally managed to reduce its large current account deficit and has recently shifted to external surpluses, which has been sufficient to stabilise and slowly reduce its net external indebtedness, which is, however, still far worse than Italy’s.

What the Figures above show is two countries with different dynamics. While Italy is still more economically powerful than Spain, it displays more structural imbalances and declining trends. There is a greater demographic problem in Italy than in Spain. Key labour indicators are worse in Italy too, despite its lower headline unemployment. Italy, once a manufacturing powerhouse, is also experiencing weaker external competitiveness and is losing global market share. Finally, Italy’s very low growth performance could jeopardise its global geo-economic position and become a heavy burden for future generations.

Spain seems to be currently in a better position than Italy to undertake its own pending reforms. However, Spaniards should pay much more attention to the Italian situation, because it is, in several ways, a future mirror of what could happen to Spain if it gets swept up in conformism and a false sense of euphoria. In an increasingly globalised and competitive world, this is no time to brag, but to work even harder. Quoting Frederick Douglas (1818-1895), ‘if there is no struggle, there is no progress’.

1 The graphs are based on historical data and the latest European Commission forecasts.