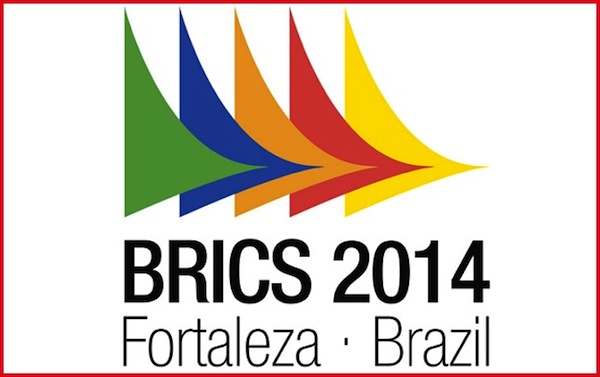 The coming weekend a number of senior officials of the BRICS will arrive to Brazil. Most of them will try to attend the football world cup final on Sunday, but enjoying the atmosphere of the Maracaná stadium will not be the highlight of their visit. After the weekend they will be headed for the 6th BRICS summit, which will be held on 15 July in Fortaleza coincidently two days after the final.

This is an important meeting because the leaders of the BRICS aim to negotiate the final (and most contentious) details of the BRICS development bank. After the summit we should know the amount of capital the bank will have and how much each country will contribute, the location of the headquarters and who will be the first executive director.

If the BRICS development bank becomes a reality it would be a milestone in the consolidation of this group of emerging markets. It would also prove wrong those, and there were many in the West, that dismissed the idea as unworkable. A bit more than a year ago when the BRICS leaders met in Durban, South Africa – closing thus the cycle of five years of annual meetings, each in one of the members of the group – the Western specialised press (FT and The Economist) gave little credence to the possibility of setting up this bank soon.

Overall, in the West – and I heard this from a number of policymakers, pundits and scholars over the past 12 months – the possibility of these different powers agreeing on something as complex as a development bank was either dismissed as unfeasible or seen with suspicion, in the believe that it was an attempt to challenge, rival or even disrupt the two institutional pillars of the Bretton Woods system: the IMF and the World Bank.

These two ways of looking at the BRICS bank are flawed. Regarding the first, i.e. dismissal, we should not underestimate the determination that these countries have to construct their own multilateral financial institutions, especially in light of the fact that the US and Europe have not fulfilled their 2010 promise to reform the voting shares in the IMF so as to give more voice to emerging markets. The ratification of these reforms is stuck in the increasingly parochial US Congress.

It is obvious that as long as China has the same voting power as the Benelux countries, there is a big incentive for China to build new multilateral financial institutions that reflect its increasing global influence.

The second approach, i.e. hyping potential disruption, is also misleading. As Henry Kissinger points out in his book “On China”, there is the culture of analysing challenges in confrontational terms in the West. This is one of the reasons why our intellectual game is chess, in which the goal is to kill the King, the sooner the better. In China, however, people like to play Weiqi, which is focused on encircling the rival. The winner is the player that has encircled the most at the end of the game. There is no checkmate moment.

China is playing a similar game in the international economic and financial architecture. It is very unlikely that China will seek full blown confrontation or try to actively disrupt the US-led liberal financial system and its institutions. To the contrary, China is one of the biggest benefactors of this system and thus it will continue to try to play an increasingly active role in the IMF and the WB. But that does not mean that it will not pursue its own strategy of setting up an institutional framework that can serve its own interests.

In this regard both the BRICS development bank and the Asian Infrastructure and Investment Bank (AIIB), the other bank that China wants to set up on its own to focus on Asia, are perfectly compatible with the Bretton Woods institutions. As a matter of fact, they fill the gaps left by the IMF and the World Bank over the years. Both have underperformed in the fields of infrastructure funding and investment in development. China, on the other hand, has some of the best infrastructures in the developing world and it has lifted 600 million people out of poverty, far more than the World Bank.

So is there a genuine need for the BRICS bank? For Amar Bhattacharya the answer is a definitive: yes. He argues that there is a case for it because there is high demand for financing infrastructure projects in developing countries but very little supply of credit. It is widely believed that in the coming years the emerging world, especially Asia and Africa, will need $2 trillion per year to finance their infrastructure needs. However, overall assistance by multilateral and bilateral, private and public, lenders will only reach $1 trillion. Therefore, there is a huge gap to fill.

This brings me to the details of the BRICS bank: capital, strategy, headquarters and executive manager. The overall capital seems to have been agreed. It will be USD50bn, and each member will contribute US$10 billion. There will also be an US$ 100 billion reserve fund for exchange rate crises, with China providing US$41 billion, Brazil, Russia and India US$ 18 billion each, and South Africa US$ 5 billion. What has not been agreed yet is where the funding will be directed. From conversations with Chinese and Indian officials, it appears that China wants the majority of the lending to go to infrastructure projects in Africa. The rest of the BRICS, though, want the funds to be distributed to different geographic areas around the world.

The location of the headquarters of the bank will be decided in Fortaleza. Shanghai seems to be the frontrunner, but the Brazilians and Indians are opposed because they argue that in China there is no Internet freedom. They cannot imagine having their staff working in a bank where they cannot access Google, Twitter and Facebook. As an Indian source told me, “can you imagine the Indian press running stories on this? It might be fine in China, but India, South Africa and Brazil are democratic countries with freedom of information”.

For New Delhi and Brasilia (not only because of internet freedom but also to avoid Chinese over-influence) it would be preferable to have the headquarters in Johannesburg. In many ways it would make sense. If China wants to steer most of the lending capacity towards this continent, why not have the headquarters in South Africa? The time zone of Johannesburg is also favourable. It is more or less halfway between Shanghai and Brasilia. Finally, as the same Indian source points out, “if you set up the bank in the megacity of Shanghai it is difficult to stand out. There is so much going on. If you put it in Johannesburg, though, it would be more visible”.

It is difficult to predict what will happen in Fortaleza. The headquarters in Johannesburg could make everyone happy. South Africa would host the bank. China would get their preferred geostrategic focus: Africa, and undoubtedly the first executive director. And Brasilia, Russia and India would achieve their goal to have the headquarters outside China. Will Beijing accept this deal? It would certainly send a strong message to those that doubt about China’s commitment to multilateralism. But then, Xi Jinping might think that the Weiqi board is the world, and the decisions on how to move the stones need to be taken in China, so finally Shanghai will be the headquarters of the BRICS development bank.