Skip to content
Inicio / Blog / How much Spanish sovereign debt does China hold?

After years trying to find out the currency composition of China’s foreign reserves portfolio (a topic mired in the outmost secrecy), I thought finding out who holds Spanish sovereign debt would be an easier job. Not least because we Europeans tend to think or at least pretend we are more transparent than the Chinese. Well, it turns out we are not. The Chinese government does not disclose the currency and asset composition of its foreign reserves and Europe’s governments, including Spain’s, do not disclose the nationality of the holders of their debt.

For a researcher this is annoying because without reliable data there is no hard evidence. I have always argued that European governments should be at least as transparent as the FED, which gives a detailed overview of the regional origin of the main holders of US treasury securities. Unfortunately, this will not happen any time soon. Hence, we are stuck in the world of guesstimates. So here is my hunch based on some media reports, anonymous interviews with Spanish and European officials and some basic maths.

Let us start with media reports. In spring 2011, when the Spanish government was desperate to attract foreign capital for its ailing savings banks (las cajas) and Rodríguez Zapatero went to Beijing cap in hand, the Spanish daily El País reported –presumably based on confidential information leaked by Spanish officials to Reuters– that China held 12% of Spanish debt.

More recently, in the summer of 2014, in the midst of the row provoked by Spain’s universal jurisdiction and the arrest warrants issued against Jiang Zemin for human rights violations in Tibet, the Spanish Foreign Minister, José Manuel García-Margallo, declared live on TVE (the Spanish public broadcaster) that ‘China has 20% of public Spanish debt, thus it would only need a mouse click to make this country [Spain] have a sovereign risk spread similar to the one we had some years ago’.

These are big words from the head of Spain’s diplomacy. Are they true? Anonymous sources at the Spanish treasury say categorically: no. They would say so, wouldn’t they? However, looking at the available data, it appears that they might be right. In order to attract more foreign investments, in 2011 –coincidently when the crisis in Spain was heating up– the Spanish government lifted the requirement for foreigners to declare the revenues obtained from the holdings of Spanish debt, so we do not have the geographical distribution but we have the absolute numbers and how much of this debt is in foreign hands.

The latest available figures, for October 2014, show that total marketable Spanish sovereign debt is €716 billion (excluding the debt of the Spanish regions). Of these, €343 billion are in foreign hands, which is 48%. If China were to have 20% of total Spanish debt it would have almost half of all the debt in foreign hands, which is unlikely. It appears that there must be a misunderstanding. The press and some officials, perhaps even the Foreign Minister, tend to confuse the percentage of holdings out of the total with that of foreign holdings, which is clearly not the same. 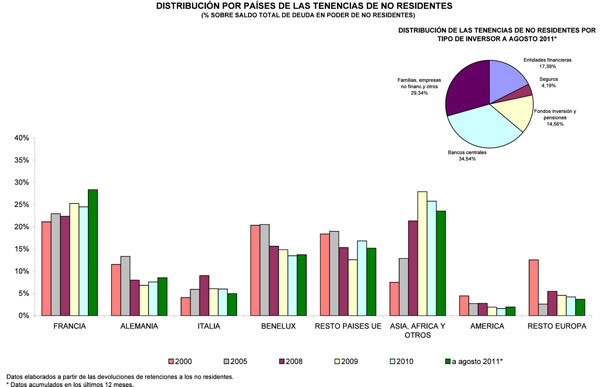 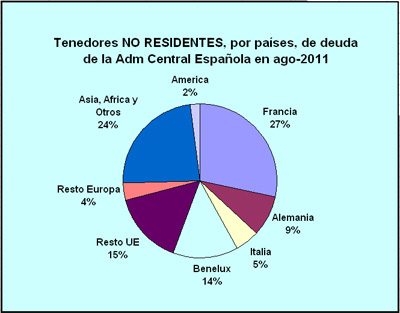 As we can see, until August 2011 France was by far the largest holder of Spanish sovereign debt, with Germany and Italy being second and third. No surprise there. Interestingly, we can also see how most Spanish debt in foreign hands is stashed away in the Eurozone or the EU. After that, the level of disclosure is rather vague. Most US investments must be channelled through London and the Benelux because 2% is a very low figure. China is embedded in a large group made up of ‘Asia, Africa and Others’, which reached a peak of 27% in 2009 and in 2011 was at 24%.

So how much of this 24% belongs to China? Twenty per cent of foreign holdings, as perhaps hinted by the Foreign Minister, would be a large figure. We have to remember that Japan is another big player. Let us assume that the Reuters leak is right and that China holds 12%, which would be half of the ‘Asia, Africa and Others’ group, still a generous assumption, but plausible. If this were the case, China would have €41 billion, equal to 5.7% of total Spanish debt.

This is hardly a big figure. To put it into perspective, it is only 1% of total official Chinese foreign reserves. Nonetheless, if these calculations are correct, China would be the largest holder of Spanish sovereign debt after France. Does this mean that China has political influence over the Spanish government? Most likely not. But as the Spanish government is keen not to annoy either the French or German governments, it might also be wise to be on good terms with the Chinese one too.