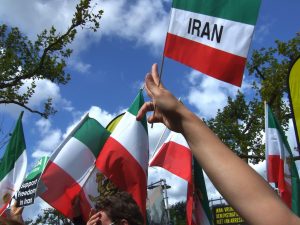 Recent negotiations held in Almaty, Kazakhstan between P5+1 members and Iran have failed. Though previous negotiations held in February seemed to indicate progress, little should have been expected from the April 6th talks. Historically rooted suspicion and general reluctance to make concessions certainly complicate any attempt to maintain diplomatic negotiations, but in order to truly comprehend recent failures, an understanding of the current political climate within Iran is paramount. Indeed, with looming elections to be held in June and ongoing rumors of a power struggle between Ayatollah Ali Khamenei and outgoing President Mahmoud Ahmadinejad, internal positioning has had an increasing impact on external behaviors.

Rhetoric coming from Ayatollah Khamenei may have doomed the negotiations from the start. The leader of the Islamic Republic publicly expressed his doubts over the viability of the negotiations, as he believes they represent a “gun to the head” economic policy with little potential of bearing fruit. Offers made by the P5+1 members were rejected on the grounds that, while they offered more concessions related to economic sanctions than previous offers, were still deemed too light when taken into consideration the amount of sanctions currently imposed on the Iranian economy. Tehran will almost certainly reject any offer the P5+1 puts forwards that does not include an explicit recognition of its right to enrich uranium and maintain what they view as a peaceful nuclear program. Such an offer is unlikely to come from the P5+1, as negotiators believe such recognition would set a precedent that could easily be followed by other members of the international community.

Looming elections to be held in June made it impossible for any agreement to be reached. The Ayatollah, in an attempt to maintain support throughout Iran, would not have made concessions that could have lowered his popularity, or portrayed an image that could be interpreted by his rivals as cowering to the West. Similarly, Tehran took notice of the United States’ general lack of interest in furthering diplomatic relations during campaign season in the U.S., and, unsurprisingly, wished to reciprocate. Though at this stage it’s premature to predict who will emerge as the winner of the coming elections, it’s unlikely that the winner will be someone whose political values differ greatly from those of the Ayatollah.  In the event that someone as close both personally and politically to the Ayatollah as Gholam Ali Hadad Edel wins the elections, it’s likely that Iran will seek to consolidate its political position and use its newfound certainty to resume negotiations with greater demands.

Whenever negotiations resume, the P5+1 will be faced with the choice to either maintain the status quo or reevaluate how they approach their relationship with Tehran. If they opt for the latter and seek a new approach to the tumultuous relationship, the possibility for sustained and realistic dialogue exists. However, in order for such as possibility to be made feasible, the P5+1, led by the United States and the EU, will need to make the first step in breaking down distrust, an element that’s come to define the relationship, and show that they’re interested in finding a realistic solution, something that’s seriously questioned throughout Iran.